She crawled her way out of the sand hole. In the pitch black darkness, she pushed out the hundreds of soldiers trying to reach the surface, always up and into the air and into the night. Then she ran for her life towards the sea. She had to reach the deep blue before the sun came up.

Enemy fire was constant. Aerial attacks and heavy artillery. Her brothers and sisters were hit all around her, decapitated, dismembered, their bodies one moment in motion, the next moment lifeless. There was no time to think, only to run.

She reached the surf. A giant wave took her away from the carnage. Now the attack was submarine. She could hear the screams of terrified soldiers underwater. She swam, swam and swam, she would never give up.

The day was gone when she reached the first mat of sargasso. The floating weed, a life-saver oasis in the middle of a liquid salty desert. She slept long and hard tucked into the lush copper green. Hunger came next. A jellyfish was within reach. A tasty snack for the tired soldier. A first bite, and the pestilence of the human world reached her. For the jellyfish was petroleum incarnated into a plastic bag, discarded, and turned into a wall of death.

The baby sea turtle never had a chance. 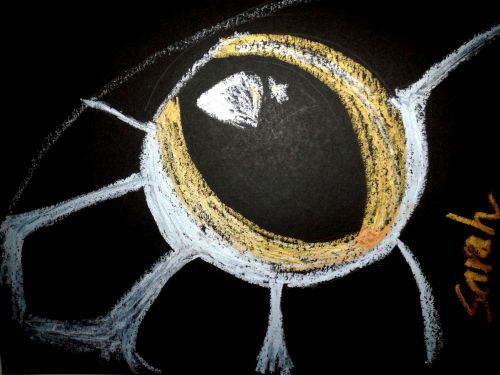 It was time for a revolution. The workers complained of working non-stop from sunrise to sunset. No weekends off and no holidays. They had food and shelter but that was all. What about the fine things in life? or about their intellectual pursuits? they were working class but they had the right to go to college, travel freely anywhere and everywhere, do the things they wanted to do and more. Not just cooped up there, in the factory.

The worker’s union was in an emergency assembly. A general strike was not enough. They had to get out of that place and demonstrate for all the world to see. The time of reckoning was now, the revolution was coming!…

“Every night, it’s the same story” thought the giant clam. “Idle photosystems make them overthink the situation. Why did I end up with a bunch of anarchist zooxanthellae?”

And the algae went back to work.

A brand new camera lens fell from a dive boat and sank into the ocean. It came to rest twenty meters down by a coral reef. The octopus was the first creature to find the lens. With her superior intelligence, she saw a market opportunity. So she took the lens and left it at the entrance of her den, with a tentacle-written sign.

The reef animals had never seen anything like it before. By bending the light, the lens became a funhouse mirror exaggerating the reflected image of unsuspecting bystanders. The pufferfish looked too fat. The trumpetfish too skinny. The clownfish looked too colorful, the pigmy seahorse too small, the green moray eel too green. The fish were devastated believing a funhouse mirror reflected the truth.

The sign next to the lens said in big bold letters: SELF HELP WORKSHOP. One by one, the unhappy fish entered the den in search of help.